Fixie bikes have been a popular means of cycling for a long time. However, they’ve been even more widespread through recent years. Whether it’s for easier and fewer repairs, health purposes, or quick acceleration, fixie bicycles aren’t something you’re going to want to pass on anytime soon.

If you’re a well-experienced cyclist, then you already know some of the numerous benefits that come with owning one of these bikes. Beginners will definitely enjoy all of the reasons why everyone should try out a fixed gear bicycle at least once. For more details on what a fixie bike is, why you need to ride one, and how they’re used, read on below!

What is Fixie Bike? Unlike any other type of bicycle in the world, fixie bikes have their cog connected to the pedals to directly correspond with your movements. It might sound confusing at first, but it’s actually the simplest method around. You have the pedals, the chain, and the cog that’s attached to the back wheel.

When the pedals start to rotate forward, it moves the wheel in the back instantly. There’s no sort of barrier feature, and cruising isn’t an option like you might have with other types of bicycles. That being said, there are all sorts of unique benefits that we will get into in a little bit here.

Pedaling forward makes you go on ahead while pedaling backward makes you reverse. It’s as simple as that! This is one of the many reasons that so many cyclists love fixie bikes. They’re also great because braking can be done by stopping the motion of the pedals.

You’ve probably noticed that when you’re moving fast, you can’t suddenly come to a complete stop by dealing the opposite direction on a typical bike. This is because they’re made to coast. Fixie bikes let you stay 100% in charge of every move that you do, regardless of how fast or slow you’re moving.

How to Ride a Fixie Bike We’ve covered most of the way you use a fixie bike, but there are still a couple of extra tips to learn. The first tip is that you should never try to slow down for a turn by reversing too hard. Ease into it just as you would if you were driving a car. While it might not mess up the pedals the first time, it could slowly wear them down after a bit.

You might notice that a lot of fixie bikes don’t have brakes on them, which might seem insane. Well, you’d be right! Many people feel that since they can push or resist the forward motion by reversing their pedaling that they don’t need brakes anymore. While it might work for some cyclists, it’s always better to use the built-in brakes that come with the bike.

Not only are most of us more accustomed to them, but they’re also much more efficient in how quickly they can slow you down for emergency situation. It doesn’t hurt to lower your speed a little for a turn, but overall you should try to depend on the trustworthy brakes!

The Benefits of Riding a Fixie Bike

Riding a fixie bike has a wide variety of benefits that everyone can enjoy. While they might not be the most well-known choice, you’ll begin to notice why tons of people are making the switch. Whether it’s for health purposes, ease of use, or durable construction, fixed gear bicycles is worth looking into for anyone.

One of the biggest benefits of these bikes is that they’re incredibly lightweight, yet equally durable. Most of us usually assume that durability means the bike must be heavier, or that if it’s lightweight it has to be fragile. Regardless of the materials that the frame is made out of, fixed gear bikes generally have a much lower weight due to the fact that they don’t have nearly as many parts.

Reduced parts not only mean less weight, but it also means fewer mechanical problems. The more moving mechanisms that any piece of equipment has, the more issues that you could potentially encounter. The simplistic, straight to the point nature of fixed gear bikes make them contain hardly any possible problems at all!

Finally, fixie bikes present even more health benefits that typical bicycles. This is because you have to pedal everywhere you go. You can’t use downhill speed, natural momentum from pedaling and coasting, or any other form of assistance other than your own two legs to propel you wherever you go.

We’ve all had that cheat day when you take the easy route, or you use all the declines to get more speed. Fixie bikes put the pressure on you, letting you stay on top of the plentiful health benefits of cycling! 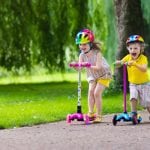